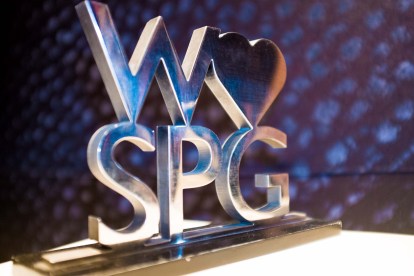 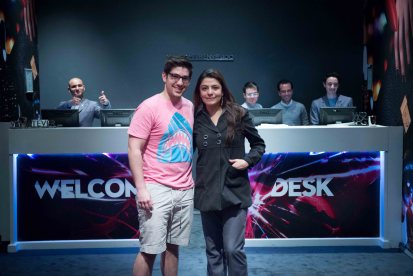 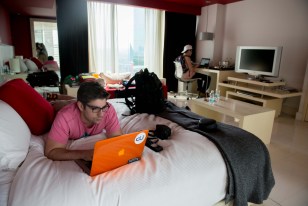 We were lucky enough to have stayed at the W Mexico City while we were filming the OU-Pilot and boy was it worth it.

Our first impression when we walked through the doors of the hotel couldn’t have been better. Cinthya, one of the members of the concierge team, a front desk attendant, as well as a gentleman from the valet staff all welcomed us with open arms. We arrived a bit before our check-in time and to no fault of their own they still arranged a complimentary package for us at the restaurant, Solea, to make our wait a bit more pleasurable.

After a not-so-great flight with an extremely early departure time we were exhausted, and all we wanted to do was relax. The hotel made sure that we were comfortable and had followed up with food, drinks, etc. to make up for the morning of hectic travel. After enjoying our welcome package, we revisited our friends at the check-in desk to go to our rooms. We chatted a bit with Cinthya (displayed above), who proved to be a great asset for us later in the trip, and then were led up to our rooms.

The rooms were not only beautiful and incredibly clean, but they gave the OUCrew a corner of the hotel where our rooms were connected. It wasn’t a normal door that connected the rooms together, but the rooms shared their own private hallway, which was perfect for the way in which we like to collaborate on projects. And, to make our lives even better while on the road they had included wifi service for both of our rooms.

We became very close with the concierge staff, both Cinthya and a gentleman by the name of Israel (also depicted above) and were able to plan our weekend with ease. We had them plan excursions for us ranging from Lucha Libre fights and guided tours of the pyramids to getting reservations at the most exclusive night life destinations in the city.

We were given the royal treatment in a city that we were told not to go to — let’s just say we can’t wait to go back!