Here’s a video of our journey through Saigon, now known as Ho Chi Minh City.  The places shown in this video are the Independence Palace, the War Museum, and the Mekong Delta, filmed with an old school flair.

So, my dad just left us to go back to real-life in the states, but these are some of the “Greatest Shots” he captured while with us! 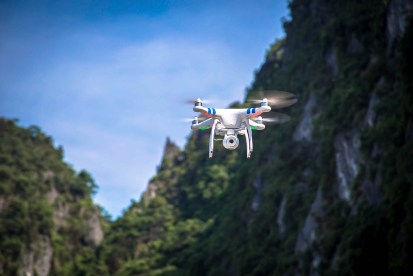 The Crew on a Dragon Boat 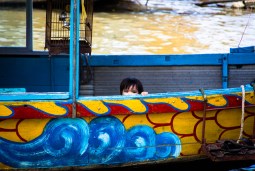 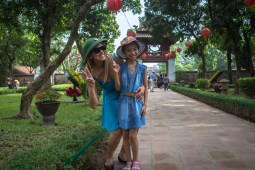 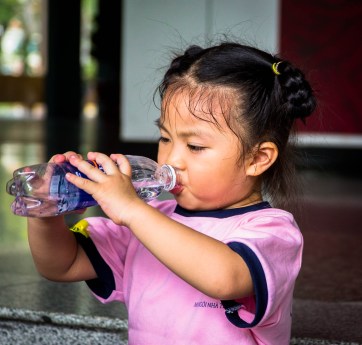 The Crew in the Mekong River Delta 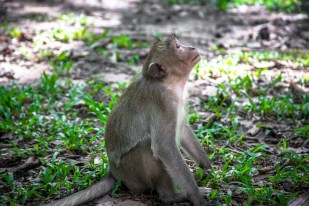 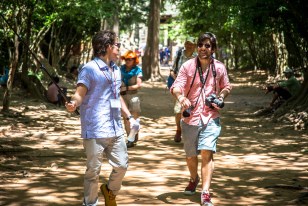 These were some of the best moments we were able to capture while in Vietnam. 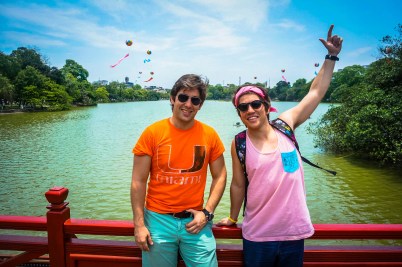 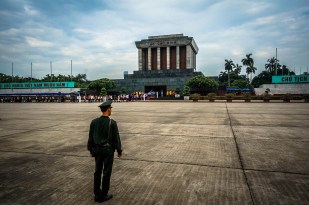 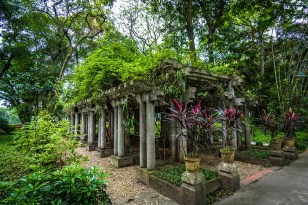 The King of the Castle 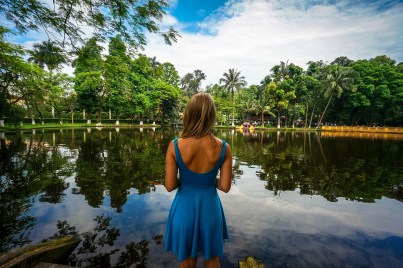 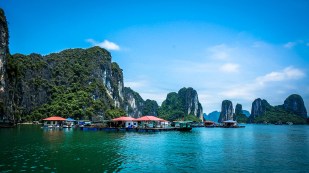 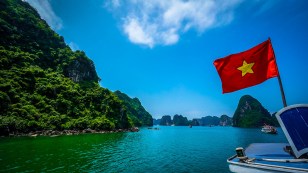 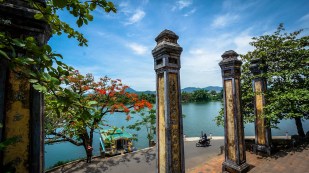 View from a Pagoda in Hue 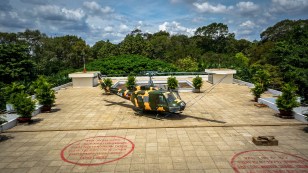 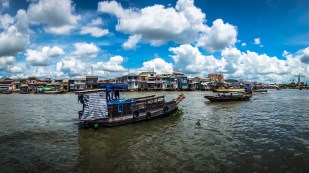 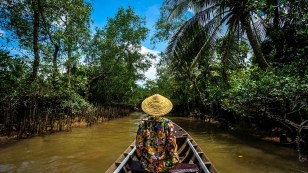 May 25th – On my way back to Ho Chi Minh City on the last leg of my journey.  While I’m incredibly excited to go back home to my wife I find myself saddened to leave the boys to continue on with their travels.  To say that these last two weeks have been an adventure would be the understatement of understatements.  It feels like the past 2 weeks have been surreal — kind of like a blur.

May 10 – We started in the north of Vietnam and slowly worked our way south. The differences between Hanoi and Saigon were stark to say the least.  You could feel the frenetic energy in Saigon, the restaurants, art galleries, clothing tailors, and the nightlife.

May 16 – Our first day in Saigon was an all day tour starting out with the former South Vietnam presidential palace equipped with the war rooms and command centers in the basement to the residential suites for foreign dignitaries once visited by Richard Nixon.

Our tour guide was a gentleman by the name of Giao Chau from Buffalo Tours who had a strong command of the English language and was able to articulate a lot of the history and culture of Vietnam. Giao made our stay in Saigon very memorable as we felt like we had our own personal valet.

We were fortunate enough to see most of the highlights of the city in our first full day. You couldn’t help but notice the wide tree lined boulevards in and around the town. The center of Saigon kind of had a hint of Paris to it. Get it? Vietnam was once a French colony.

Saigon also had the very hi-end shops, which made Gesy, the Brazilian Princess, feel very much at home.  You had shops like Hermes, Ferragamo, Louis Vuitton, and Cartier. (Please ask Gesy for the list of fine shops, she had committed to memory) I’m wondering whether her afternoon shopping spree, or as I would describe it an injection of monetary stimulus into their local economy, will be reflected in next quarter’s Vietnamese retail sales and local GDP figures. It was funny to see that every time she left one of these fine shops Gesy was able to leave members of the staff with a lasting smile. I leave it to Gesy to be a team player and for being a solid supporter of the local economy where ever that might be.

May 17 – we started to make our way to the Mekong River delta about a 3-hour drive away from the city. We were fortunate to have our air-conditioned van equipped with a wifi hotspot, which made the long drive a bit more enjoyable. The scenery was beautiful and I lost count of how many rice paddies we went by.

We arrived at the Mekong River Delta where we boarded our, let’s say, 27-foot very basic floating vessel. I was amazed at the floating villages, open markets, and even local art galleries. One small point their local art galleries are nothing like we are use to in the United States: trust me it adds to the adventure. However, on a small note, I did learn how rice cakes were made.

One of the day’s highlights was when Michael launched his aerial camera drone. The locals were coming out of their floating homes just to see this unidentified object flying through the air — technology like this has never made it to this far corner of the world and my boys were able to create some unforgettable moments for a lot of people that day.  The children jumping up and down just waving at the drone not really knowing what it actually was.

We eventually transferred to two smaller boats to take in the jungles of the Mekong. Imagine a shallow undeveloped Venice where there was nothing but lush jungle for as far as the eye could see. After we disembarked from these small vessels we got back into our van where we traveled back to the ‘comforts’ of our Saigon hotel.

We had gone pretty deep into what Vietnam had to offer, but nothing had prepared us for Cambodia. Stay tuned.

I gave a kiss to the love of my life and told her I’d see her in a couple of weeks. I’m joining our two boys on their Onwards and Upwards adventure to do it for the story. My flight from Miami, Newark, Beijing, then Hanoi was pretty much uneventful, however thank God for business-class. I met Michael, Daniel, and Gesy at the Hanoi airport as our flights pretty much arrived within minutes apart.

My adventure apparently started right away on my first evening in Hanoi as my checked bag was lost. I resigned myself to the fact that I was doing this for their story.  Upon my arrival at the Hanoi airport, and having flown from Beijing to Hanoi on Vietnam Airlines, I couldn’t help but notice the mannerism and professionalism of the flight crews, it was such a relief after such a long journey.  Having learned that my bag was not with me the customer service of Vietnam Airlines couldn’t have been more helpful and more courteous. With a high degree of confidence they assured me that they would do everything possible to locate my bag. Thankfully my bags were found in Beijing and were delivered to my hotel the next day.

The following day, I’m awoken by Daniel around 10:30am local time. I must have slept for 12 hours straight and was feeling rather refreshed. Moments later I joined the rest of the crew for our first day in Hanoi. Michael and Daniel right away wanted to check out the local flavor however Gesy and I were showing some restraint.

I for the life of me never experienced the tens of thousands of moped scooters that filled the streets of Hanoi. I literally saw a family of four on one moped. I thought I was a risk-averse individual, but crossing the streets of Hanoi puts risk into a different perspective. In my view I would describe it as organized chaos. Michael and Daniel jumped on a scooter with a driver heading off to the old quarters area of Hanoi, the open markets. Gesy and I continued to show restraint by jumping on to a rickshaw and met the boys a short time later.

We started walking around in this open market, which was nothing short of a sea of humanity and capitalism, where literally everything was for sale.  As we were walking around you couldn’t help but feel you were in a portable steam room unable to escape the heat.  The temperature was in the high 90’s with relative humidity around 80%; bottom line it was rather uncomfortable and we needed to find a different venue.

Voila we stumbled onto this back alley massage parlor, albeit very legit and with air-conditioning (thank god), and were met by a massage team of 5 Vietnamese women. My expectations were going to be tested. I picked out the head, neck, and shoulder massage 70-minute package for $12.00. I thought to myself — It was only $12.00 what did I have to lose, but I set my expectations accordingly. As this young lady proceeded to work out the damage that 20 hours of flying can do to the human body she tried to have a conversation with me, but I was only understanding every 10th word that happened to be in broken English. For me I tried to be consistent with my communication skills so I kept repeating the same thing over and over, in English, “this feels veri, veri, good.”  I said that for the 70 minutes and was hoping she got the message.  I literally had this petite woman walking on my back and working very hard to loosen the stiff muscles, to say that this was a great feeling would have been an understatement it absolutely exceeded my expectations.  I felt so refreshed. The value of this experience was priceless, and that was only the first day of the adventure.

Getting caught in everyday life back home can be overwhelming — commuting to a job, paying bills, tending to responsibilities, upholding ‘social status’, dealing with friends… Once in a while we just need a break from it all where we are able to detach and really re-charge the batteries, but in a different sort of way that just another vacation cannot do for you, and that is exactly what my dad came to do.

Here I am half way around the world — traveling around Asia from country to country, visiting more airports than hotels, being lost more often than knowing where I am or how to get back home, all while armed with my backpack and camera. It has been one of the most revitalizing experiences of my life.

I have always traveled, I have been privileged enough to travel often, and I have really gotten this travel bug from my father. He is by far my biggest role model and someone who I aspire to be each and everyday. Well, my father just joined us on our adventure in Vietnam; he packed his bags and traveled half way around the world to join us.

So, without further ado, I wanted to welcome our pinch-hitting blogger, Luis Rangel.